Taking back self-worth and keeping it.

May 04, 2012
Loving another person, unless you're an absolute master of detachment, brings with it a lot of vulnerability and the possibility of getting hurt. Their opinion of you carries more weight than the opinion of a stranger or aquaintance, because you feel that they know you better than most people, so they must know what's closer to the truth. But that's some flawed logic.

The thing to learn after someone's really crushed your self-worth is that you should always keep it and hang on to it. If you accept yourself, and you're always doing your best, while still allowing yourself to be human and make mistakes, then your self-worth should be very solid.

A relationship like this may come to an end sooner, but it would do so with a feeling of "that's really too bad. I liked that person a lot." and moving on...not trying to convince them that you are worth more than you're being treated, and not trying to "kill them with kindness" or prove your worth to them. If they don't see it, or if they do see it but just have some things going on within themselves that prevents them from treating anyone well (including themselves), then they are not in a place to be a good partner.

They may need a friend, or they may just need some more years to figure themselves out, but trying to be in a relationship with someone while they're at that point will erode or even completely wreck self-worth.

To show love for the self and for the other person would be to let the idea of a relationship now with them go. You'll end up saving them regret of not treating you right down the line as well. No one really wants to treat anyone badly, but if they have their own insecurities to battle with, it's just going to happen.

You can love openly and fully, while holding on to your self-worth. When someone comes along who sees in you the same things you do, it will be true love, and it will be incredible. So work on rebuilding your self-worth...become aware of negative or limiting beliefs you've taken on, and let them all go. It's a process, and it may take awhile, but it's completely worth it.

By doing so, you will realize every great thing about yourself and know that you don't need to fear anything about any other relationship from now on. No one will be able to take your self-worth again, not because you'd become cold or closed off, but because you will see your own value, regardless of if someone else does, too or not.

Popular posts from this blog 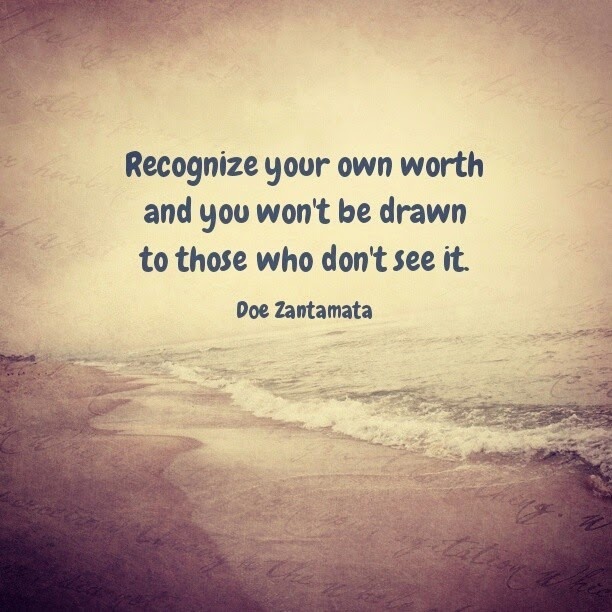 Recognize your own worth and you won't be drawn to those who don't see it.  -Doe Zantamata Always be aware of your feelings. They are the voice of your intuition…your inner truth.  A lot of times in relationships, people are very happy and excited to be in something new, and are very complimentary and notice all the good little things. Then after awhile, especially in those who are insecure, they lose that initial "niceness" and instead begin to get comfortable.  Eventually, some start to seem to notice only the little things they don't like or that bother them, and have forgotten all about the good little things.  This can happen subtly over time, so it's good to keep track of your inner feelings at all times. If you notice not feeling right, don't second guess yourself or talk yourself out of it. Reflect on that feeling and what it means to you.  There are some people who feel that once a person is "hooked," they do
Read more

Guilt is a motivator 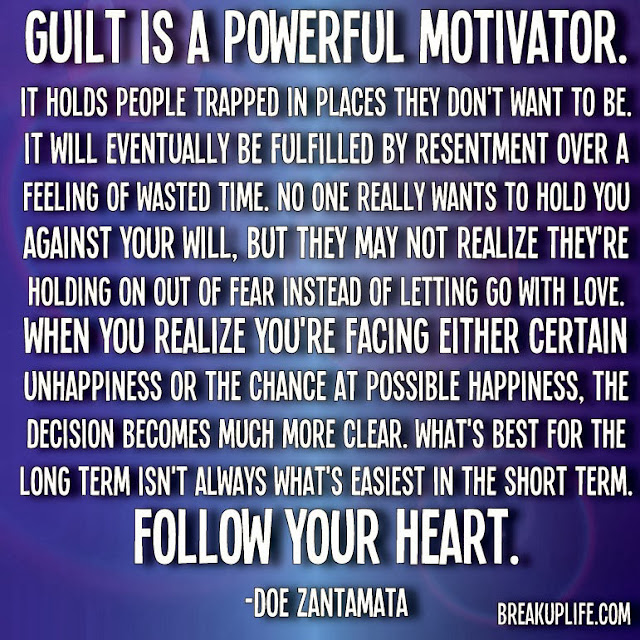 Guilt is a powerful motivator. It holds people trapped in places they don't want to be. It will eventually be fulfilled by resentment over a feeling of wasted time. No one really wants to hold you against your will, but they may not realize they're holding on out of fear instead of letting go with love. When you realize you're facing either certain unhappiness or the chance at possible happiness, the decision becomes much more clear. What's best for the long term isn't always what's easiest in the short term. Follow your heart. -Doe Zantamata
Read more 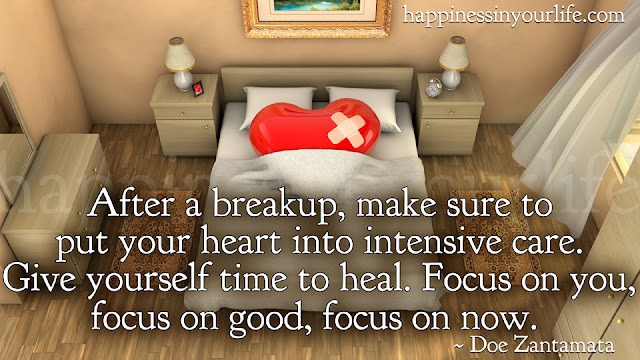 ﻿ After a breakup, make sure to put your heart into intensive care. Give yourself time to heal. Focus on you, focus on good, focus on now. ~Doe Zantamata The Breakup By Doe Zantamata A breakup when all your heart was in it can be as difficult to get through as losing someone by death. For the first short while, just focus on anything good in your life, and take it day by day, or hour by hour if you have to. Find things in your life that you need to focus attention on, and that you really love doing. Creative things where your attention needs to be on them are good. Be with your feelings. Grieving can't be rushed. You're not weak for feeling pain, you're sensitive. Only sensitive people can be compassionate, and really help others, but they also feel pain a lot more strongly. Get detached...write a list of every quality you would want in a partner. Then go back to that list and honestly answer if this relationship gave you those things: 1. in the
Read more